Menu
Home » Information » What is a Bindi? – Symbolic Meaning of the Red Dot

What is a Bindi? – Symbolic Meaning of the Red Dot

A bindi is traditionally a red color dot worn right in the center of the forehead, originally worn by Jains and Hindus from India. If you’re a fan of Bollywood movies you’re bound to have seen it numerous times.

Although the bindi is a cultural and religious forehead decoration of the Hindus, it’s also worn as a fashion trend that’s quite popular around the world. However, it’s a highly significant adornment that’s considered auspicious and revered in the Hindu religion.

Here’s a closer look at where the bindi first came from and what it symbolizes.

History of the Bindi

The word ‘bindi’ actually comes from a Sanskrit word ‘bindu’ which means particle or drop. It’s also called by other names due to the several dialects and languages that are spoken all throughout India. Some other names for the bindi include:

It’s said that the word ‘bindu’ dates far back to the Nasadiya Sukta (hymn of creation) which is mentioned in the Rigveda. The bindu was regarded as the point where the beginning of creation occurs. The Rigveda also mentions that the bindu is a symbol of the cosmos.

There are depictions of Shyama Tara, known as the ‘mother of liberation’ on statues and images wearing a bindi. These were said to be from the 11th century CE so while it’s not possible to say for sure when and where the bindi originated or first appeared, evidence suggests that it has been around for many thousands of years.

Thousands of years back, the sages known as rish-muni composed religious texts in Sanskrit called Vedas. In these texts, they’d written about certain focal areas in the body which are said to contain concentrated energy. These focal points were called the chakras and they run down the center of the body. The sixth chakra (famously called the third eye or ajna chakra) is the exact point where the bindi is applied and this area is said to be where wisdom is concealed.

The purpose of the bindi is to enhance the powers of the third eye, which helps a person to access their inner guru or wisdom .This allows them to view the world and interpret certain things in a manner that’s truth and unbiased. It also allows a person to rid themselves of their ego and all negative characteristics. As the third eye, the bindi is also worn to ward off the evil eye and bad luck, bringing only good fortune into one’s life.

According to the Hindus, everyone has a third eye which can’t be seen. The physical eyes are used to see the external world and the third one inside focuses towards god. Therefore, the red bindi symbolizes piety and also serves as a reminder to give the gods the central place in one’s thoughts.

The bindi symbolizes various aspects of Hindu culture, but it’s always been most commonly associated with marriage. Although people apply bindis of all colors and types, the traditional and auspicious bindi is the red one which a woman wears as a sign of marriage. When a Hindu bride enters her husband’s home for the first time as his wife, the red bindi on her forehead is believed to bring prosperity and gives her an important place as the newest guardian in the family.

Hinduism, widowed women aren’t allowed to wear anything that’s associated with married women. A widowed woman would never wear the red dot as it symbolizes a woman’s love and passion for her husband. Instead, a widow would wear a black dot on her forehead in the place where the bindi would be, symbolizing a loss of worldly love.

In Hinduism, the color red is extremely significant and symbolizes love, honor and prosperity which is why the bindi is worn in this color. It also represents Shakti (which means strength) and purity and is frequently used for certain auspicious occasions such as the birth of a child, marriages, and festivals.

Deities in religions like Hinduism, Jainism and Buddhism are usually depicted wearing a bindi and meditating. In meditation, their eyes are almost closed and the gaze is focussed right between the eyebrows. This spot is called the Bhrumadhya, which is the spot where one focuses one’s sight so that it would help enhance concentration and is marked using the bindi.

How is the Bindi Applied?

The traditional red bindi is applied by taking a pinch of vermillion powder with the ring-finger and using it to make a dot between the eyebrows. Although it looks easy, it’s quite tricky to apply since it needs to be in the exact location and the edges should be perfectly round.

Beginners usually use a small circular disc to help with the application of the bindi. First, the disc is placed in the right location on the forehead and a sticky waxy paste is applied through the hole in the center. Then, it’s covered with vermillion or kumkum and the disc is removed, leaving a perfectly round bind.

Various types of materials are used to color the bindi including:

The Bindi in Fashion and Jewelry

The bindi has become a popular fashion statement and is worn by women from all corners of the globe regardless of culture and religion. Some wear it as a charm to ward off bad luck whereas others wear it as a forehead decoration, claiming it to be a catchy accessory that draws immediate attention to one’s face and enhances beauty.

There are many types of bindis available on the market in different forms. Some are simply bindi stickers that can be stuck on temporarily. Some women wear jewels in its place. These are intricately designed, made from little beads, gems or other types of jewelry which are far more elaborate. There are all kinds of bindis ranging from plain to fancy bridal bindies.

Nowadays, many Hollywood celebrities like Gwen Stefani, Selena Gomez and Vanessa Hudgens have started wearing bindis as a fashion trend. Those who come from cultures that view the bindi as an auspicious symbol sometimes find it offensive and don’t appreciate important and sacred elements of their culture being used for fashion purposes. Others simply see it as a way of embracing and sharing the Indian culture.

FAQs About the Bindi

What’s the purpose of wearing a bindi?

There are many interpretations and symbolic meanings of the bindi, which can make it difficult to pinpoint its exact meaning when worn. In general, it’s worn by married women to signify their marital status. It’s also viewed as warding off bad luck.

What colors do bindis come in?

Bindis can be worn in many colors, but traditionally, red bindis are worn by married women or a bride (if at a wedding) while black and white are thought to be bad luck or colors of mourning.

What is a bindi made of?

Bindi’s can be made of a wide range of materials, most notably a bindi sticker, a special paint or a special paste made using a variety of ingredients, like red turmeric.

Is it cultural appropriation to wear a bindi?

Ideally, bindis are worn by Asians and South East Asians, or those who are part of a religion that uses a bindi. However, if you’re simply trying to wear the bindi because you like the culture or think of it as a fashion statement, this could be considered cultural appropriation and can cause controversy. 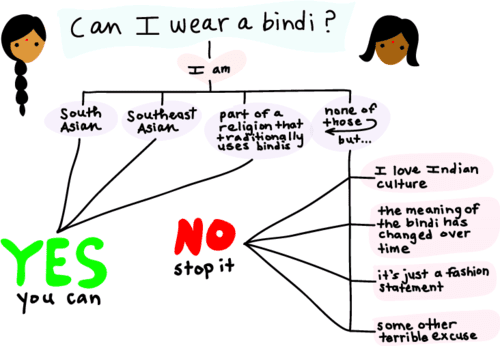 The symbolism of the bindi now isn’t adhered to by most people like it was before but it continues to mean a lot more than simply a fashionable red dot on the forehead to South Asian Hindu women. There is a great deal of controversy surrounding the question of who should actually wear the bindi and this continues to be a highly debated topic.

Dani Rhys has worked as a writer and editor for over 15 years. She holds a Masters degree in Linguistics and Education, and has also studied Political Science, Ancient History and Literature. She has a wide range of interests ranging from ancient cultures and mythology to Harry Potter and gardening. She works as the chief editor of Symbol Sage but also takes the time to write on topics that interest her.

How Do Crystals Work (Or Do They?)

Who was King Solomon? – Separating the Man from the Myth

Added to wishlistRemoved from wishlist 3

Medusa – Symbolizing the Power of the Feminine

What’s Your Spirit Animal? – A Guide to Find It

A Dream Within a Dream – Symbolism and Common Scenarios

Dreaming About Thieves or Stealing – Meaning and Symbolism

Find Us On Social Media

Sign up now for weekly facts, the latest blogs, and interesting features.