However, the Eye of Horus is its own symbol and has no connections to these types of eye symbolology.

A powerful image for ancient Egyptians, the Eye of Horus was deeply rooted in their mythology, symbolism, and even in their measurement system and mathematics.

Let’s take a closer look at the origins, history and symbolic meaning of the Eye of Horus symbol.

What’s the Origin of the Eye of Horus Symbol?

Depictions of the Egyptian God Horus

The symbol of the Eye of Horus originates from the myth of the god Horus and his battle with Seth. Horus is one of the most popular and important Egyptian gods, still commonly seen on many Egyptian emblems. He had the body of a human and the head of a falcon and was known as the god of kingship and the sky.

The symbol of the Eye of Horus originates from a battle between Horus and his uncle Seth. Horus was the son of the gods Osiris and Isis and Seth was Osiris’ brother. However, as Seth had betrayed and killed Osiris, Horus eventually sought revenge from his uncle and the two had a series of battles. In those fights, Horus severed Seth’s testicles and Seth returned in kind by shattering one of Horus’ eyes into six pieces. Horus did prevail in the end and his eye was restored by the goddess Thoth, in some legends, or the goddess Hathor, in others.

In a variation to the legend, Horus ripped out his own eye as a way to bring his father Osiris back from the dead. His eye was then restored to him magically.

Either way, the restored eye was then named Wadjet after the old Egyptian goddess by the same name. Wadjet’s name was meant to symbolize health and wholesomeness. As a result, the Eye of Horus became known for those concepts as well.

What’s the Symbolic Meaning of the Eye of Horus?

Overall, the Eye of Horus’ was one of the most beloved and positive symbols in ancient Egypt. It was used to represent healing, health, completion, protection and safety.

Much like the Nazar Boncugu, another famous eye symbol that signifies protection, the Eye of Horus also was believed to be a protective symbol. The eye was believed to repel evil and ward off misfortune.

Because of its mythological origins, the Eye of Horus was also thought to have healing properties. The symbol was often used on amulets, as well as on healing instruments and tools.

The Eye’s symbol was depicted with six distinct parts – a pupil, left and right sides of the eye, an eyebrow, a curved tail, and a stalk beneath it. The six parts symbolized the six pieces the eye of Horus was shattered into.

More so, each part was also assigned a mathematical fraction as a unit of measurement –

Curiously enough, their sum equals 63/64, which was a number believed to symbolize life’s imperfections.

How to Use the Eye of Horus

Considering that the Eye of Horus is a positive, protective symbol, many people continue to use it in various ways.

The Eye of Horus in Jewelry and Fashion

The Eye of Horus is quite popular in jewelry, tattoos and on clothing. Whether or not you subscribe to the superstition of the symbol, the beauty of the symbol itself makes it a good design for art and fashion.

The curving lines and swirls can be stylized in many ways to create distinct jewelry. The symbol is quite popular as pendants, earrings and even on rings and charms. Also, it’s a unisex design and suits any style.

The Eye of Horus was and still is one of the most used ancient Egyptian symbols in any art form. Even when we discount its false perceived connection with the Eye of Providence, the Eye of Horus is still frequently portrayed by painters, artists, tattoo artists, clothing and jewelry designs.

To this day, regardless of the wearer’s religious or spiritual believes, the Eye of Horus is widely accepted as a positive and protective symbol to wear. Below is a list of the editor’s top picks featuring the eye of Horus symbol.

FAQs About the Eye of Horus

Is the Eye of Horus left, or right?

The Eye of Horus is the left eye, while the right eye symbol is known as the Eye of Ra. These are often depicted together. 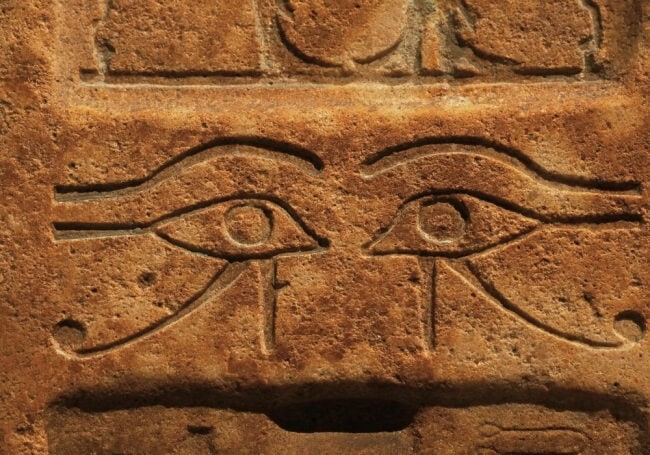 Is the Eye of Horus a positive or negative symbol?

The Eye of Horus is a positive symbol, representing many benevolent concepts like health, protection and good fortune. There’s a tendency to misjudge eye symbols as being bad luck, but this is generally incorrect.

What’s the difference between the Nazar Boncugu and the Eye of Horus?

These are two different symbols but look alike as both represent eyes. The Nazar Boncugu originated in (now) Turkey and is an ancient symbol dating back to around 8th century BC. It, too, is a protective symbol representing good fortune and warding off evil.

Is the Eye of Horus a good luck symbol?

For the superstitious, the Eye of Horus is a protective symbol and one that brings in good luck. It’s still worn and carried by those who want to repel evil and invite good fortune.

Some people find the symbolism of the eye somewhat enigmatic and mysterious, perhaps even malevolent. However, almost every eye symbol throughout history has had positive connotations, representing good luck, protection, health and wholesomeness. The Eye of Horus is no different. It remains a beneficial symbol that is still popular and representative of Egyptian culture and heritage.

Dani Rhys has worked as a writer and editor for over 15 years. She holds a Masters degree in Linguistics and Education, and has also studied Political Science, Ancient History and Literature. She has a wide range of interests ranging from ancient cultures and mythology to Harry Potter and gardening. She works as the chief editor of Symbol Sage but also takes the time to write on topics that interest her.

Chaos Star – What Does It Mean and Where Did It Originate?

What is Mezuzah? – Symbolism and Significance

Added to wishlistRemoved from wishlist 2

Who is Tantalus of Greek Mythology?

20 Profound Greek Proverbs and What They Mean

Find Us On Social Media

Sign up now for weekly facts, the latest blogs, and interesting features.